Energetic and Humorous Communicator of Hope 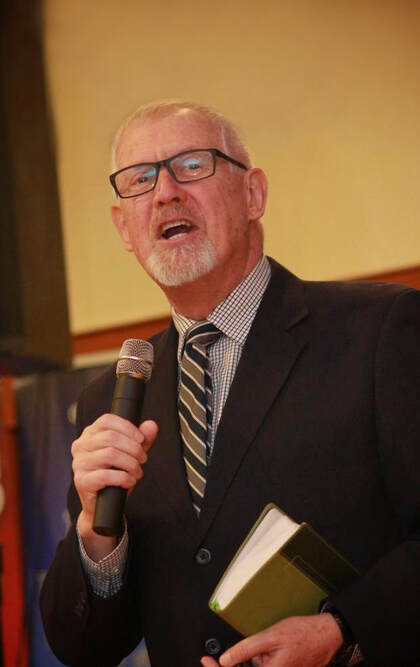 David Arrol Macfarlane is a pastor, author, and evangelist who has led churches in Ontario and British Columbia.
David has addressed thousands of people at events, conferences, and in churches around the world and across Canada. He has appeared on numerous TV shows such as the 700 Club, 100 Huntley Street, and It’s a New Day, plus numerous radio programs.
“I want to give Christians hope, that the Gospel hasn’t lost it power,” David said. “People are looking for hope and we need to show them how relevant Christianity is.”
David has written for or been featured in numerous publications including Decision magazine, Christian Week, and Faith Today. David’s latest book Ignite Your Life: Living for Significance shares how to live looking outward and in the process, live richer and fuller Christ-centred lives.
A former Director of National Initiatives for the Billy Graham Evangelistic Association of Canada, he now teaches at N2N Christian University, where his courses are offered for pastors in four languages in over fifty developing countries.
Encouraging pastors and congregations, both large and small, to be inspired to reach their communities for Christ in practical and creative ways is David's passion.
David and his wife, Diana, live in Waterloo, Ontario, and have three married daughters and eight grandchildren.
​Comments about David
You brought energy, passion and contagious enthusiasm to the topic …
- John Pellow, CEO, Canadian Council of Christian Charities, Elmira, Ontario, Canada.
You did a great job of communicating God’s love and focus at the Mayor's Prayer Breakfast.
- Dr. Randy Neilson, BCF, Brampton, Ontario, Canada
I especially was amazed at your stories and how effectively you were using them to make your points.
- Daniel Albarian, California, USA
David Macfarlane ...is highly imaginative...
Dr. Michael Green, Oxford University, UK.
David encourages us to think of new ways to make a difference for Christ in the communities we serve.
- Dr. Luis Palau, International Evangelist Portland Oregon, USA
Personally I valued so much the way that you worked our theme into your presentations.  It was excellent and not missed. We’d like to have you back... - John Havercroft Power to Change.

​David on the cover of Billy Graham's Decision Magazine 2017